Djémilaton Ibrahim still remembers the exact date: it was on the night of August 4th. She was sleeping when they came to wake her up because there was a woman in labour who was fully dilated. The baby’s head was visible, but the mother did not have the strength to go on. “The woman was saying – oh, I’m going to lose my baby. I told her – you will not lose your baby, because we have the equipment that will help you give birth to your child effortlessly”.

The woman in labour was lucky because the midwife had just received training on emergency obstetric care and resuscitation of newborns (soins obstétricaux d’urgence et de la réanimation du nouveau-né) two weeks earlier. The classes helped the midwife get new knowledge and techniques on how to resuscitate newborns, but especially to be introduced to an instrument “that performs miracles”: the ventouse suction cup. 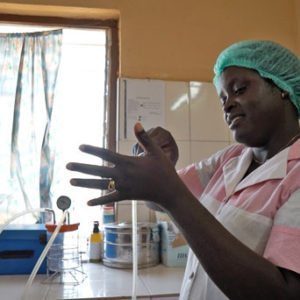 This equipment, which is applied to the baby’s head, helps the mother during the delivery, in the final stages of labour. “In fact, we apply the suction cup and help the baby come out, to be born”, she continues. “The mother was crying tears of joy. She was very happy and surprised”.

Djémilaton has coordinated the Gando maternity unit in northern Togo for the last two years. The infant mortality rate in this region, with its plains and savannas in a Sahelian climate, is the highest in the country. Deliveries in health facilities (53%) and births assisted by specialized personnel (36%) are also below the national average, however, in recent years there has been a reinforcement on several levels: equipment, materials, medication, and other types of support, especially the training of personnel specialised in emergency obstetric and neonatal services (EONS) (Soins obstétricaux et néonatals d’urgence (SONU)). In 2014, there were 30,000 assisted births in the 23 operational health units, supported by the French Muskoka Fund in Togo (10% of the assisted births across the whole country).

“The midwife plays a very important role in maternal and child health” Djémilaton stresses before listing the various spheres and stages of her work: in theory, the work of the midwife involves helping “from the beginning of conception to the childbirth” but in reality, it continues with the counselling of mothers, including breastfeeding exclusively up to six months, and the recommendation of respecting a minimum of two years break between pregnancies.

The midwife at the Gando maternity has the help of 2 nurse midwives and 1 assistant. Ever since they started to successfully apply the new obstetric care they learned during the training, they have delivered about 45 babies per month, compared to 30 deliveries in the past. “The first use of the ventouse suction cup on my patient sent ripples throughout the village. The women came to the maternity unit to see what helps to pull the babies out, they wanted to see “the machine to pull out babies”, she tells us smiling. 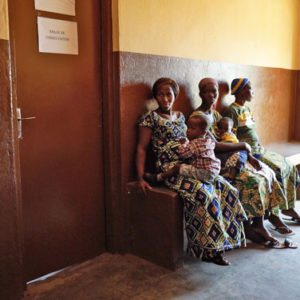 The increase in the number of births is a source of satisfaction for Djémilaton, but it isn’t the only one. “They saved us with this training session” she explains to us at the door of the Gando maternity, a brightly coloured porch decorated with posters on maternal and child health.

Before having had training “on real situations”, as she points out, she had held a baby who was not breathing well in her arms. “I said: let’s transfer her to the Mango Prefectorial Hospital [in the nearest town] and, in the meantime, the baby died. This really had an effect on me”, she says sadly.

Immediately afterwards, she tells us of yet another story about a baby with breathing difficulties. Only this time, we had a happy ending: “we managed to save the baby with the material available from the training session on newborn resuscitation. She was named Djémilaton because it was Djémilaton who saved her”.

Djémilaton speaks to us, but she is anxious to get back to work – so much so that she does not take off the white coat or disposable bouffant surgical cap during our conversation, not even for the photograph. Before leaving, the midwife and a mother herself smiles and says: “Helping to bring a healthy baby into the world, that is what makes me happy. That’s what motivated me to be a midwife”.