«A victory against malnutrition»

In a beautiful, natural landscape, and under the watchful eye of the Queen of Guéra, the mountain range and the region’s visiting card, we meet Haoua, a young nomad mother who waged a battle against malnutrition and malaria, which her daughter suffered from.

Haoua, 17, is married and has a 17-month old daughter (Halimé). She welcomes us to her nomad campsite in Kadam (Ferrique Kadam), where she has settled with her family. We are close to Niergui, a village in the Sahelian region of Guéra in Chad.

Haoua’s neighbour, Ismael, tells us that “this region is very popular with nomadic families that come here during the rainy season, because of its fresh and green pastures where they can feed the cattle”. “The cultivation of cereals (mostly sorghum and maize) is another activity that ensures the survival of many families during this time of year”, Ismael adds.

Haoua takes care of her daughter, does the household chores, and grows peanuts, millet, sesame, and other cereals, which contribute to the family income. Still, the lack of a proper diet and other deficiencies have put her baby in danger. 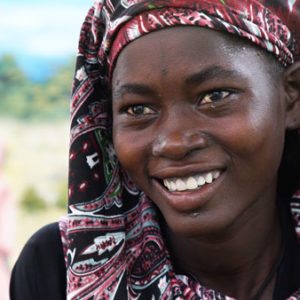 In regards to what took her to the Niergui Health Centre the first time, Haoua says: “I went with my daughter because she had severe diarrhoea”. Encouraged by her husband and advised by a community health worker who regularly visits the Ferrique Kadam, Haoua walked for several hours with her daughter on her back to be seen at the Niergui Health Centre, located 15 Km away.

“In addition to diarrhoea, he told me that my daughter was malnourished and had malaria”, Haoua recalls the words of the nurse that attended to them at the Niergui Health Centre. Halimé was admitted and began treatment for malnutrition and malaria.

“After receiving medication, my daughter was cured in two weeks”, the mother points out in Chadian Arabic. In later visits to the health centre, Haoua was given ready-to-use therapeutic food (RUTF) (aliments térapeutiques prêts à l’emploi (ATPE) in French) – better known as “plim plim” or “plumpy nut” –, and took the opportunity to get therapeutic flour, which is also indicated for the replenishment of essential nutrients in children.

“The problem is that mothers are unaware of the food needed to feed their babies and they ignore the importance of exclusively breastfeeding”, says Pambro Rigobert, the nurse who examined the nomadic baby. The nurse, who has also been head of the Niergui Health Centre since 2013, also comments on the “cultural constraints and bad habits” among the most common causes of malnutrition, recurrent in that area of the country despite the abundance of nutritious local produce.

Asked about the most common children’s cases in the Health Centre, Pambro Rigobert refers to cases of “malaria, diarrhoea, and malnutrition” coming immediately after acute respiratory infections.

In this context, the nurse stresses the importance of technical and financial partners (such as the French Muskoka Fund) in the reduction of child mortality, which “provide medication, food supplements, and mosquito nets impregnated with insecticide”, among other materials. 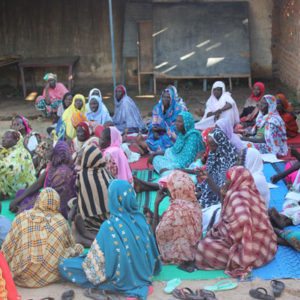 These partners, the specialist continues, “also contribute in regards to the equipment used and the community health worker’s level of training – these are volunteer health workers who visit the villages to advise families and identify maternal and child health problems”. The community health workers play an essential role in providing health care to the families, both in terms of the population living in remote villages or with difficult access, and nomadic communities whose tradition dictates that a newborn should not leave the campsite during the first 40 days of life.

“We are delighted with the work of the community health workers”, says Ismael – Haoua’s neighbour – a nomadic shepherd and a father for the first time recently. Like Haoua, Ismael has settled with his family in Ferrique Kadam and grows cereals like sorghum and sesame.