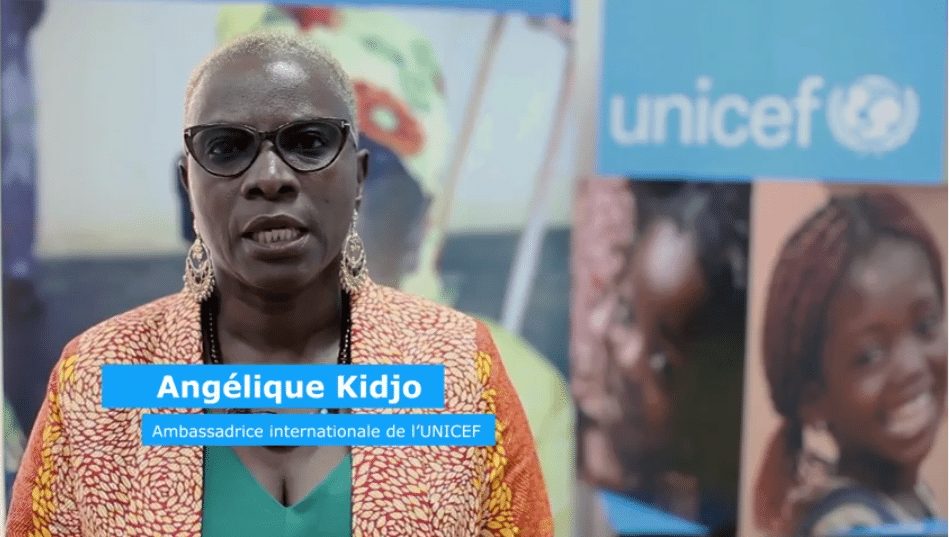 COTONOU, July 18th, 2017. “A little girl is still a child. She cannot be a mother or a bride. Let her grow up to live a fulfilling life. Say NO to child marriage!”, sing in chorus UNICEF’s Goodwill Ambassadors, Angélique Kidjo and Zeynab Abib, accompanied by Danialou Sagbohan, Kalamoulaï, Don Métok, Sessimè, Dibi Dobo, Norberka and Olga Vigouroux.

As part of the national Zero Tolerance Campaign against child marriage, launched by the Government of Benin on June 16th – the Day of the Africa Child (DAC) – the nine artists committed themselves to this unprecedented movement by breaking the silence. Through the creation of a song and a video, which are deeply moving, yet full of hope, they called on the population to act.

Watch the video  DISONS NON AU MARIAGE DES ENFANTS
“Child marriage is a negation of children’s right to grow up free. Every child has the right to a childhood. I call on parents not to marry off their young daughters as they are our wealth and the future of our continent”, said Angélique Kidjo who co-created the song with Zeynab Abib.

The artists sing in a variety of languages, including Fon, Mina, Mahi, Sahouè, Yoruba, Goun, Bariba and French in order for the message to reach people throughout the country and in neighbouring countries.
“The impact on these girls is terrible. Once married, they no longer attend school, they are raped, they fall pregnant, which puts their health and that of their baby in danger. We artists are saying NO to all these injustices! Girls are not the property of anyone; they have the right to choose their own destinies”, insists Beninese pop star Zeynab Abib, who was able to mobilise Benin’s greatest artists around this cause.

In most African societies, marriage extends beyond the couple, sealing the union between two families. As such, certain parents or guardians force their children to marry before they are physically or psychologically mature. Poverty, poor levels of education, and the prevalence of traditions and belief systems, along with a general culture of impunity, are all tied to the continued practice of child marriage.
Among the 700 million women around the world who are victims of forced marriage, more than one in three – or 250 million – were married before the age of 18. In Central and Western Africa, two in five girls (41%) marry before reaching their 18th birthday. In Benin, one in ten girls is married under the age of 15 and three out of ten girls are married before they are 18 years old.
“We need all the strength and weapons we can muster to fight the scourge of child marriage. Art, especially music, is a powerful weapon. As Nelson Mandela said, ‘politics can be strengthened by music, but music has a potency that defies politics’. This power must be harnessed!” said Dr Claudes Kamenga, UNICEF Representative in Benin.
The national authorities, through the voice of the Minister for Communications and the Minister of Social Affairs also hailed the commitment of the performers and called on the media to broadcast the video widely.
The Zero Tolerance campaign against child marriage is directly in line with the African Union Campaign to End Child Marriage on the continent. The campaign has been made possible thanks to financial support from the nations of Belgium and the Netherlands’.